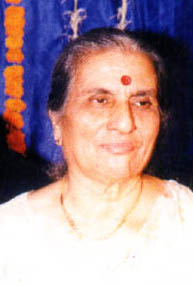 Mrs Paru Chawla was born on 19th July 1932 in Sindh. She was the eldest child born into a middle class family with her father Mr Deepchand Lalwani working in the railways. She was the most pampered child by virtue of being the 1st born and eldest in the family. Her unconditional love for her father is unmatchable and her personality went through a complete change after she lost her father suddenly in the year 1967 when he was just 50 plus,and Paru was in her mid-thirties then. Paru who was an atheist till then overnight turned towards God and Spirituality. That was the time she started reading the “Guru Granth Sahib” at home in the memory of her beloved father nd for 43 years nonstop (record breaking period). she has been doing Chownki and  Bhogsahib on her father ‘s Death Anniversary.
Paru always maintains  that the seed of hard work  was sown into her by her loving mother and father taught her the lessons of  honesty and always being busy. After completing her matriculation at the age  of 17 years she started working to contribute towards the family income  as  her  father  was the  sole  earning member. Although Paru did not get an opportunity  of  attending  formal   college  education  ,she   is  a  responsible  member  of  the  family  took  over  the  responsibility  of  education,  jobs, marriage  of  her  6  siblings  and  as her  father  was no more. Paru played an equally  important  role  in looking  after Thakur’ s 3 brothers as soon as she got married to Thakur. Paru has sacrificed  her youth in taking care of all her family  members and ofcourse  her own 3 children (2 daughters and 1 son)
This  unique quality of selfless love to one and all has  earned  her  the  goodwill  of  everbody.
While   she  was  busy  doing her  daily  chores, she  did not  give  up  her  passion  of  working  for  her  sindhi language. Till  today she is always ready and eager  to  teach  Sindhi  to  anybody. She has been  running  sindhi  classes   for last  50 years and she believes that  even  if  1 person speaks Sindhi  then there is no hope lost. Each one can reach one and teach one.
A chance  meeting  with  Dada Panjwani  was a turning point in her  life as Dada treated  her  like a daughter and tapped  the inner potential in her and introduced  her  to the  world  of “Sindhi  Kalaams  and  Sufi  Chownkis”  and then there was  no looking back for  her. Inspite  of not having any formal training in singing, she became a singer of the masses as she always sings from the bottom of her heart, full  of emotion and vibrancy. Her  voice has  an uncanny  resemblance to Reshma, famous Pakistani singer. Paru is the  only  singer  who  can  quote “Shah Abdul Latif”, “Sachal  Saaeen”,  and “Sami Sahib” at one go without referring  to any book or  diary.
She  is a  poetess, writer and a singer all 3 rolled into one  which is a very rare  combination not found in  any  other  artist. Alongwith singing  this multifaceted lady continued writing  sindhi  poems and  books. She has an inbuilt  knack  of  knowing  what  the  reader  desires which resulted  in her compiling  the great works of many distinguished writers and presenting  to the readers. “Jeeare Laij Zanjeer”, “Saahir  Laij  Sambhaar”,  “Rakh  Jhulan  Te”,  “Choond Sindhi Kalaam ain Dohira”.”Drishtant Drishtant”,  “365  Deenhan:, Gaalih  Mein  Gaalih” and  a book compiled on jokes too called “Khilo  Khilo”. A special mention has to be made about 2 books  which  have created history:
1.”Satar Manka: (means  seventy pearls)  which  was  a  gift  from  Paru  to Thakur on his 70th birthday and  it  contains  70 couplets of “Shah”,”Sachal” and “Sami”  with meanings in simple words.
2.”Sindhi boli roee  dinho” is about how the language  feels  when it is neglected.
All that paru has learnt and presented is the outcome of her self study  with a keen mind and intellect which is forever hungry for acquiring knowledge in any which way.
Paru is a perfect  example  of “Where there is a will, There is surely a way Paved by God” 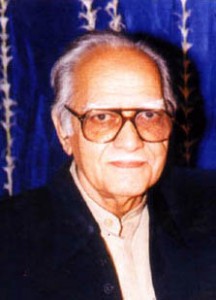 Mr Thakur Chawla was born on 18th Feb, 1931 at Sindh. He takes great pride  in  saying  that  he  belongs  to Darazaa, the land  of  saints  and  fakirs. In contrast  to  Paru’s  family  Thakur  belonged  to  a rich  Zamindar  family  who  rolled  into  money  in those  days. He lost  both  his  parents  in his  early childhood, probably that is one of  the  reasons  why  he  gives so  much importance to family life and adores his  children, grand children their  families and his great grandchild. In Sindh, he owned a building which was named ”Thakur  Niwas” where milk, honey and  lassi flowed  like  water  and  many  poor  families  were fed  by  his  rich  family every day.

He was a pampered child, pampered by the worldly riches surrounding him in those days he used to own 150 shirts and 25 pairs of shoes at any given time.

His formal education was up to matriculation only as in his youth he  had to go through  the  trauma  of  the  partition and had  to flee from sindh in 1948  empty handed. He  had  never  imagined  that  he  would not go back  there.It was a  shock for him here, new  place, new  people, struggle  on empty  stomach. So  gradually he started his life from scratch  in India. During  this  period  he  married Paru(1954) who  happened  to  be his  lady luck (like  King  Midas) and who  supported  him through thick and  thin  in  his  frustrating, struggling  years.

While Paru  continued with  her  job  in  the railways, they  laid  the  foundation  of  Thakurs’s business  of  manufacturing  leather  watch  straps. But his  love for  Sindh, Sindhi  language  and  Sindhi  culture did not allow his creative side  to remain inactive. He  had  an  eye  for  beauty  hence  the  1st magazine that  he edited in Sindhi  was called ”Suhini”.

Over  the  years Thakur  has  become  a renowned  writer, mainly  short stories but  each one  hard hitting which compel the reader  to think.his  stories  are always  based  on day  to  day  life or incidents  which he observes and puts them into  words and expressions in his beloved language. The titles of his books are worth mentioning because they create a curiosity in the reader to pick up and read.

Presently he is the editor of the famous Sindhi Magazine “Sipoon” which is well liked by all.

Thakur also like Paru was and still is a great admirer of Dada Panjwani and used to attend his Sufi Chownkis in dada’s house on every Monday for years together.

He was dada’s silent support system when Dada Panjwani conceived  the  idea  of  building  a cultural centre  for  the Sindhis.Thakur  helped  dada Panjwani in realizing  the dream of building such a centre ,”Seeta  Sindhu  Bhavan”. The foundation of Sindhi Kallams, Chownkis and Sangeet which  was laid  by dada Panjwani  is  being  carried out by  Thakur and Paru selflessly  for  last  20 years. every fortnight (Sunday) a Sindhi  musical Program of Dance, Drama, Sangeet  is held at SSB where artist  from all over the  world  get  a  platform here to perform. Thakur  is  one  of  the  trustees   of

Mukesh chandiramani
09-Jun-2018 02:28 pm
I would like to attend the events and programmes that are held by you kindly let me know the future events and dates

Devi Nangrani
28-Aug-2016 06:19 pm
Such people who serve selflessly never die. But remain in hearts of true seekers who trod on their footprints

Shalini Sagar & Dr. Baldevanand Sagar
20-Feb-2015 11:15 am
We salute to Dada Thakur Chawla & Parul Chawla for their dedicated services in the field of art, culture and literature. It will be most suitable to call them an institute for Sindhiyat. Shobha Lalchandani & Sindhu are carrying forward the legacy of their parents. We wish them all the best

Tarachand Rupchand Variyani
13-Dec-2013 05:06 pm
Real the great couple in sindhi community. I have heard that Mr. Thakur Chawla has passed away on 12.12.2013. This is very shocky news. This type of remarkable person is very needy to society. But before almighty god no body can do any thing. Tahnks. OM SHANTI OM SHANTI OM SHANTI Tarachand R Variyani, Deputy Executive Engineer (Civil), Porbandar Port GUJARAT Birth place of mine and Mahatma Gandhi also.

Shalu Meena Bellani
11-Jan-2012 10:37 pm
Wow! God Bless you both a very happy healthy life together to keep supporting our sindhi language and culture. Your dedicated work is just amazing. We are so proud and Blessed to have such great people in our community.

sunil B rijhwani
27-Sep-2011 04:59 pm
Respected uncle and aunty, I can understand how life feels after our belowed family member.I also faced this thing but got inspiration, emotional and thoughtful support from SADHSANGAT and SHREE GURUGRANTHSAHIB and living happily now and fulfilling my duty towords my family- parents. presently lecturer in engg. college of rajkot- gujarat .GOD bless you and your good activities which i hope brings smiles to so manyâ¦..GOOD LUCK.

Ghulam Shabir Kazi from Hyderabad Sindh
22-May-2011 11:09 am
wow, I impressed very hard while reading the journey of paru and thkur. I belong to Moro, about 80 km from Daraza where Mr. Thakur born. I want to make a relation being sindhi with Mr. Thakur and Paru. Will u help me in the matter.

parshotam khushalani
17-May-2011 08:38 pm
my salute to this humble couple for doing constant service of sindhi community during day and night May the richest blessings of lord be with them pishu

Ramchandani
13-May-2011 05:04 pm
I use to visit PANJWANI TRUST LONG BACK AND ENJOYED THEIR PROGRAMMES.

Ramchandani
13-May-2011 05:03 pm
Really dedicated couple to comunity. We are proud of them. God bless them together for such work.

nazeer ahmad gaad
28-Feb-2011 04:58 pm
I admire the selfless work of Mr.& Mrs. Thakurs, it is because of such people that others will be inspired. nazeer gaad

Devi Nangrani
25-Feb-2011 08:01 pm
Congratulations Anand, Shobha for presenting this marvellous site to the Sindhis. Paruji and Thakur Chawla are the legends of this era. The fact is the dedication to the sindhi community and the language is par excellent Keep adding more about their life glimpses with good wishes Devi Nangrani

jyoti n rahul
18-Feb-2011 09:25 pm
wish u a super life ahead. may all that u cherish b yours with a generous sprinkling of health, wealth n nupital bliss. regards. jyoti sakshi oochita n rahul 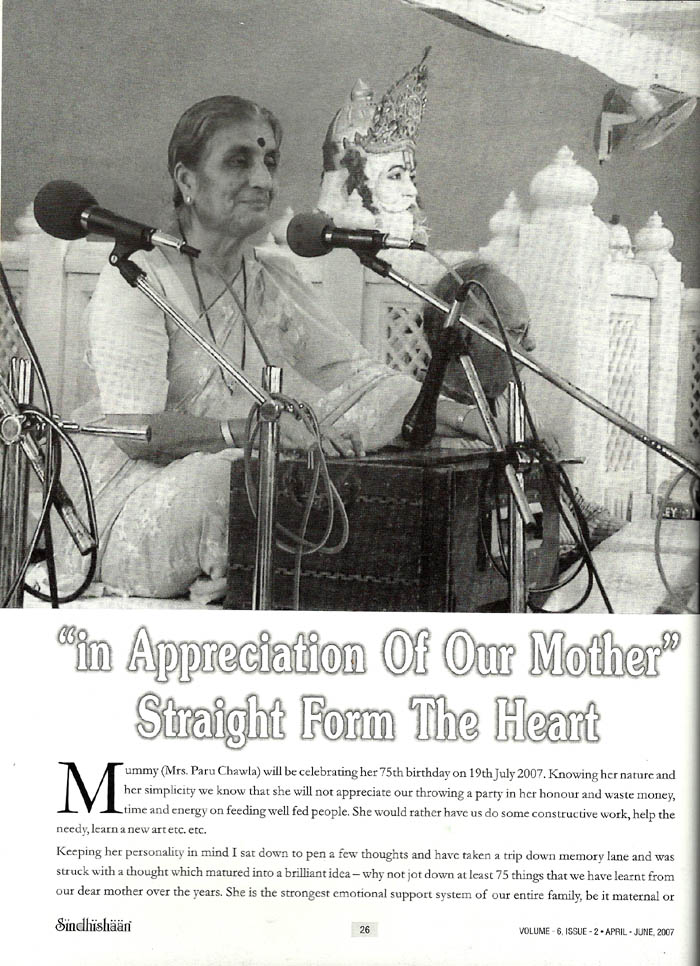 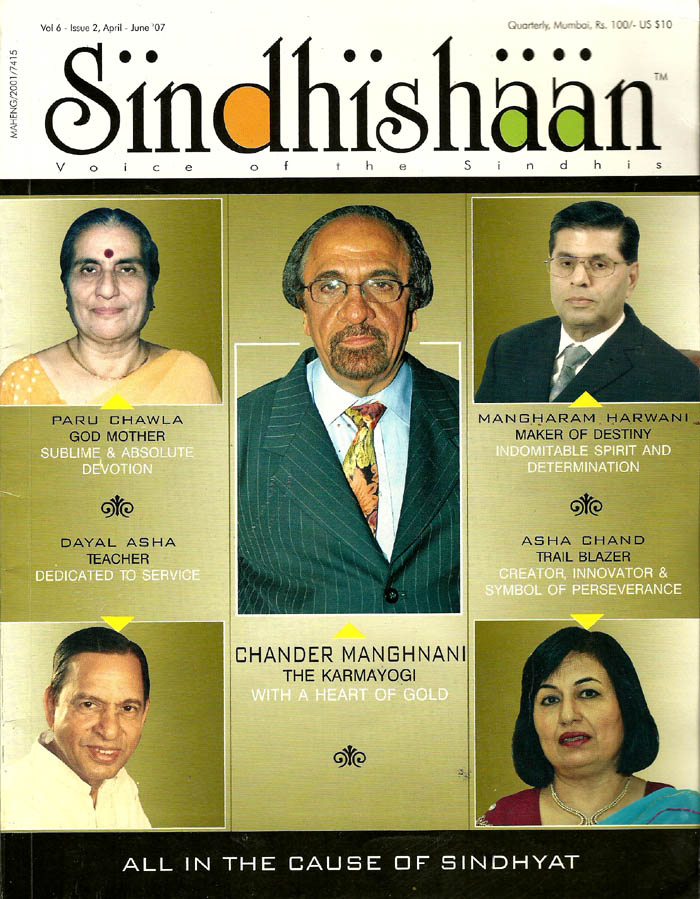